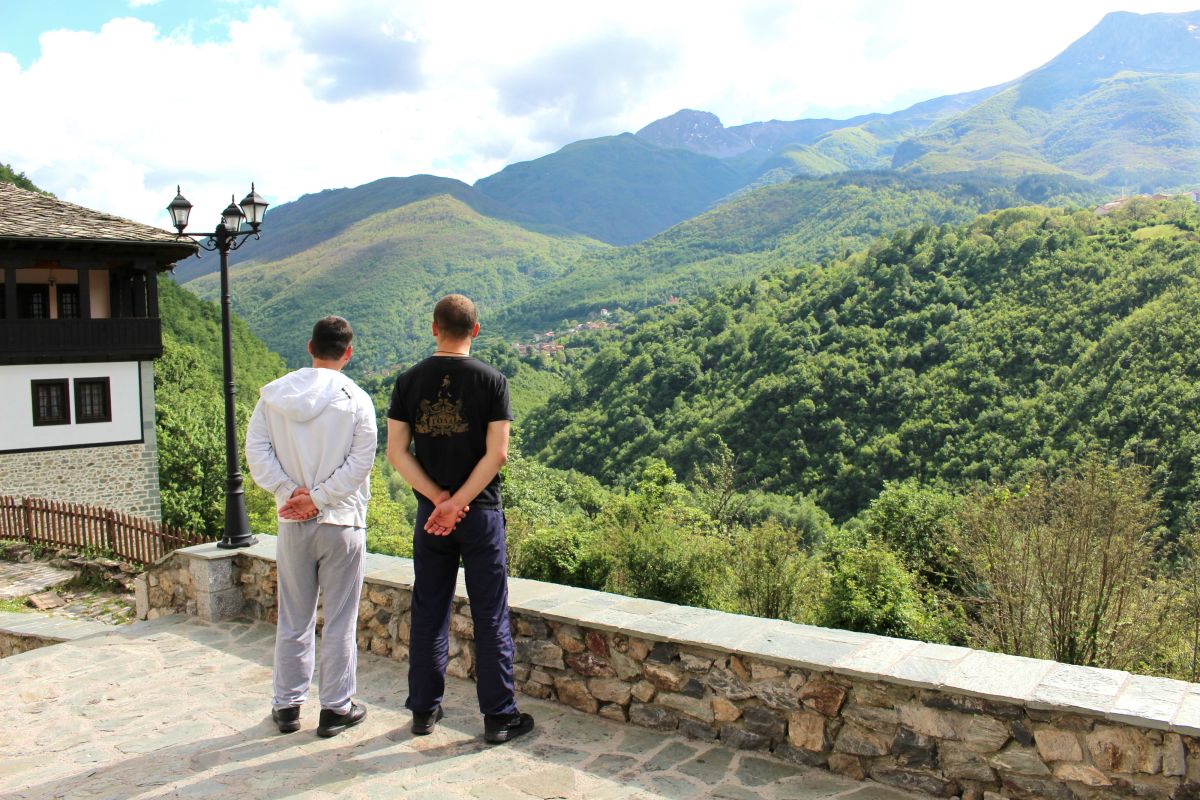 Article originally published by The Fix.

Hidden in the green nature of Macedonia in Eastern Europe, men recovering from addiction to heroin, methadone, and other hard drugs find safety and support behind the centuries-old walls of a monastery. By living as the monks do, over a hundred men a year get their lives back on track.

Sixteen years ago, a Macedonian Police Academy student begins selling illegal weapons. Crossing to the other side of the law is a fall from grace for 22-year-old orphan Milan Labus. It leads to his eventual imprisonment. At the time, Labus believes he has hit rock bottom.

But it is a false bottom, collapsing from under him, when one of his co-prisoners introduces him to heroin. He becomes addicted, and uses the drug every day upon his release.

“Is it better to be alive and on heroin, or dead?” he asks.

Finding the drugs and enough money to pay for them is a difficult existence. Labus often finds himself in abandoned locations with heroin of questionable quality running through his veins.

Labus: I had to do something, I had to change myself

Four years after leaving prison, Labus attempts to kick the habit by transferring to methadone, an interim drug that aims to reduce opioid addiction. But, like many others, Labus becomes dependent on the medication that takes a further nine years to quit.

“I had to do something, I had to change myself,” Labus says today. “But it’s hard to be a better man when you live in hell.” His face still shows the telltale signs of drug abuse, but despite his permanently tired appearance, his eyes show both determination and softness. “I had no God, no faith and no friends.”

It all changed for Labus when an ex-user told him about the program of the Bigorski Monastery. “I know what to do to be a better man now that I live with God. I know the real road.” The 38-year-old is one of more than a hundred men who pass through the monastery every year.

Tucked away in Mavrovo National Park, the 18th century place-of-worship is surrounded by small sprawling villages and high-rise trees. While monasteries are a stock sight in Macedonia, Bigorski offers a unique program for drug users to detox. The monks allow those seeking help to live in the monastery, find guidance, and avoid the temptation of addiction.

Different paths to addiction
Miki Andovski has been part of the Bigorski program for over a year. His addiction began differently than Labus’. Andovski spent his days working in his family’s bakery, under the watchful eyes of his parents. His spare time was filled with friends. Then, at the age of 14 Andovski began experimenting with marijuana, ecstasy and speed.

He became argumentative and his face grew exhausted and drawn. Previously amiable conversations with his parents turned to bickering for more money.

Andovski had, like Labus, fallen victim to heroin addiction. His parents soon figured out what was going on, and they pleaded with him to stop. Without Bigorski’s help, the now 31-year-old believes he would be in jail, dead, or one of the “living-dead.”

However, the road to recovery requires dedication and a complete change of lifestyle.

“Here, they learn to live like we live,” says Brother Siluan Madiorovski, one of the monks in the monastery. His black habit drapes off his body, in stark contrast to Andovski’s and Labus’ t-shirts and sweatpants. The monastery offers a very different life for the men.

Brother Siluan: We don’t give them much spare time

Upon arrival they are put on a detox of drugs administered by the monks to help with withdrawals and to assist with sleeping. The drugs last just long enough to get them past the symptoms, but from then on they must have the will to continue.

“God is the doctor of all doctors,” says Brother Siluan.

The men sleep together in dorms, waking at five a.m. They work an average of 48 hours a week to keep their hands occupied, but require no smoking breaks because cigarettes are banned. They attend three church services a day.

“This is the first time they have lived like that, they need to learn rules,” explains Brother Siluan. “We don’t give them much spare time.” In their rare free hours the men are encouraged to read books or enter discussions with the Brothers of the monastery.

A daily ritual
Each day, as the hands of the clock creep to four p.m, a Brother approaches the main square of the monastery. He clashes two wooden sticks together, the sound resonating through the surrounding mountains, signaling the second church service of the day.

Inside the church, a voice murmurs Macedonian prayers rapidly. The monks, villagers and ex-drug users gather together on the outskirts of the room. They clasp their hands tightly over prayer benches or make the sign of the cross in quick succession. Outside the church, the remainder of the monastery is silent, save for the odd chirp of various caged birds.

Macedonia is currently in the top 25 percent for opioid drug use out of 160 countries surveyed in the United Nations Office for Drug and Crime World Drug Report 2014. While no survey on drug use among the general population has been conducted locally, the European Monitoring Centre for Drugs and Drug Addiction estimates there are approximately 8,000 individuals in Macedonia addicted to opioid drugs.

It is unsurprising: Macedonia is located directly on the Eastern European drug trafficking route. The landlocked country is surrounded by drug-producing or drug-transit states: Afghani heroin crosses Greece to get to the rest of Europe, Albania produces mass-stores of cannabis, Bulgaria produces methamphetamine, Serbia is considered the center of drug production and transit in the Balkans, and South American cocaine crosses the state in passage to the east.

But here, in the bright sunlight of the monastery, tourists mill peacefully around the area. Their waists are encircled by the modest black skirts provided at the entry. Labus and Andovski are cheerful outside. Labus ruffles the hair of a passing toddler. “We junkies love kids,” he says, laughing.

A demanding program
Men arrive at Bigorski from all over Macedonia and stay for different periods of time. “Some stay between one and three weeks and leave, but the full program is one year,” Brother Siluan says. “We want them to change something in their life.”

Only 30 men can stay at a time. Sometimes they have to wait between one and two weeks for a spot. “It is a kind of test to see how much they want it,” Brother Siluan discloses. “If they keep calling, it means they are committed to change.”

For Labus the beginning was difficult. “You are a bad man, closed inside. You feel like you can’t change. You want it, but you know it will be hard,” he says. “The monks and the Abbot in the monastery have love. They help us. They try to reach to the heart. When that happens, life is easy.”

“IT IS NICE TO KNOW THAT THERE IS A PLACE THAT WANTS TO HELP YOU,” SAYS LABUS (LEFT). IMAGE: FIEKE SNIJDER

Brother Siluan estimates that out of the hundred men that arrive each year, approximately 30 complete the full program. “Of those, 80 percent are still clean today,” he says. “Of the men that don’t stay the full term, only one percent is still clean today.”

Repeat visits are common. For Labus, his first visit was unsuccessful because of an impending scheduled jail sentence.

“I didn’t want to come and I didn’t want to listen,” he says. “I knew I had to go back to prison so I didn’t try.” The monastery advised him to finish his jail time and return after. Brother Siluan visited Labus in prison to encourage him to come back upon his release.

For Andovski it is his fourth time at the monastery. The first time he came he was 19 and stayed for six months. For a while after his departure Andovski felt good, and resisted the urges. “But I hadn’t learnt,” he says, “I started using again, and felt pain in my soul.”

He returned to the monastery twice more, but left both times. Now, at 31-years-old, he has remained at the monastery for a full year. He attributes his success to growth: “I’m more mature, smarter.” He hopes to open his own bakery in a village nearby.

Brother Siluan: Our best satisfaction is when we see them after one, three or five years, with families or kids and still on the right path

Cleaning up their act
The program is provided to the men for free, in exchange for their work at the monastery and commitment to improving their life. “They ask nothing of us,” explains Labus, “except to be a better man.” In the darkened light of the guest room of the monastery the mutual respect between Labus, Andovski and Brother Siluan is evident.

“Our best satisfaction is when we see them after one, three or five years,” says Brother Siluan, “with families or kids and still on the right path.” As an example, he mentions a former participant who found love in the sister-program for female drug-addicts. “They married and have three children. They have remained clean for eight years.”

Andovski has been off drugs for one year. Labus is clean for three. Both attribute their success to the monastery, but say it is difficult when you leave.

“It’s hard outside,” says Labus. “But if you stay in contact with the monastery you will be okay, it will become easier. If you go out and forget the monastery and everything you learnt, you will not survive.”

A knock on the door in 1998 by a young drug-addict seeking spiritual help, transformed the monastery into a one-of-a-kind drug rehab. Image: Fieke Snijder